Foresight to Beat Your Dynasty Leagues To The Future: Part 2 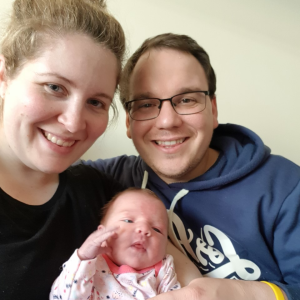 Are you looking to get ahead of the curve in your dynasty league? Are you wanting to pick up some players who aren’t getting a lot of love right now in the hopes you can find a diamond in the rough? Look no further as we will check out a few more players to help you prepare for next season.

Every season a rookie sixth-rounder or a fourth-year player who hasn’t had the opportunity to shine, breaks out. We want to get ahead of the curve to give you a competitive advantage in your league.

This article will help you out now in preparation for your 2021 dynasty season, so you are ahead of your league mates and are heading towards that championship-winning season. 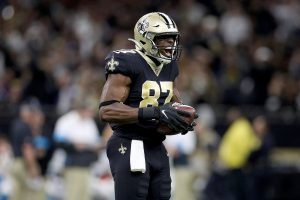 The New Orleans Saints have one of the best wide receivers in the NFL in Michael Thomas and one of the best running backs in Alvin Kamara. The one thing they haven’t had in a while is a top tight end. The last great tight end they had was Jimmy Graham, who in 4 of his 5 seasons in New Orleans had receiving yards of 1310, 982,1215 & 889. Before the 2019 season, the saints signed Jared Cook to be the tight end who could replicate Jimmy Graham’s stats. Doing what the Saints had hoped, he amassed 43 receptions for 705 yards (career-high of 16.4 yards per catch) and nine touchdowns (also a career-high) across only 14 games.

We have seen Cook’s receptions fall to 25 through Week 14 for only 350 yards and six touchdowns. Drafting Dayton’s Adam Trautman to be the tight end of the future could be a major reason as to why. Through 11 games, Trautman has 11 catches for 109 yards and one touchdown. What jumps out is the increase in offensive snaps.

In Weeks 1-5, Trautman played 66 offensive snaps per PFF. Following the Bye in Week 6, he has now played in 177 snaps per PFF or 25 per game. With him being viewed as a developmental prospect, we can only expect his production to increase.

Not many dynasty teams are willing to roster backup tight ends, so check your league to see if he’s available. Cook will be gone in the offseason, and the starting role will become Trautman’s to take over. Pick him up now and watch his stock rise in 2021 to become a TE1. You’ll look like the smartest person in the room.

Could OBJ really OBGone from Cleveland? 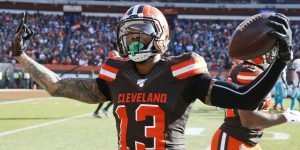 When Odell Beckham Jr was traded to Cleveland before the 2019 season, the Browns were crowned NFL Champions by many people for having landed the enigmatic superstar. The season didn’t go as planned as the Browns were missing the playoffs. Rumors surfaced from the Dawg Pound Beckham was unhappy.  Still they fought through their differences with coaching changes in flux and an eye towards a better system in 2020.

2020 didn’t start without issues; however, a season-ending Week 7 ACL tear all but sealed Beckham’s time in Cleveland. A 12.791 million dollar salary guaranteeing on the third league day of the 2021 NFL season is sure to lock his faith.  With Beckham out of the way, the Browns will need to look for replacements, and the answer could already be on the roster.

Rashard “Hollywood” Higgins arguably had his breakout game in Week 13 against the Tennessee Titans, being targeted nine times by Baker Mayfield for six catches, 95 yards and a touchdown. However, his best statistical game was against the Bengals when Beckham was injured. Higgins was targeted six times for six catches 110 yards.

Higgins’ career has seen flashes as his best season finished with 39 catches for 572 yards and four touchdowns in 13 games, and through 10 games in 2020, he has 25 catches for 400 yards and three touchdowns. Higgins has become a favorite second option behind Jarvis Landry, establishing great chemistry with Baker Mayfield. This allows him to lock down a starting wide receiver job moving forward. If he’s available, pick him up quickly in preparation for 2021. Also, keep an eye out for sixth-round pick Donovan Peoples-Jones.

Talk about an absolute must-have on your dynasty roster; Peoples-Jones had teams sit up and take notice of his outstanding testing at the combine. Posting the highest SPARQ (Speed Power Agility Reaction & Quickness) score of all offensive players, he and Raiders’ Henry Ruggs were the only two to finish in the 99th percentile from the 2020 draft. SPARQ is formulated to give teams an idea of how different combine workouts can accumulate and affect each other.

Peoples-Jones has not had the stats of other wide receivers from this class (nine targets, seven catches, 164 yards, and two touchdowns), but what he has shown is the ability to make key plays when required, catching the winning touchdown pass in week seven against the Bengals and a 75-yard touchdown in Week 13 against the Titans. The Browns have a run-heavy offense and rely on the tight end to make plays, so the use of three-receiver sets is not as much at other teams, but what Peoples-Jones has done this season has been enough to cement him in that role.

Peoples-Jones is the type of player you want on your dynasty bench as he is one injury away from a starting role, one breakout week from usurping the WR2, and one game away from having another fantasy superstar.

Just because you’re out of the playoffs doesn’t mean you can’t continue to develop your rosters. Get ahead of your league by looking forward to 2021 and keep up with my articles as we continue to look into a few more end of the bench dynasty guys who should see more playing time.

As the great Joe Theismann once said, “Nobody in football should be called a genius, a genius is someone like Norman Einstein.” 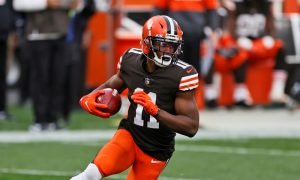