How To Optimize Rookie Drafts – Wide Receivers and Running Backs

The NFL Draft is a lively time for NFL teams and their fans. This carries over to dynasty football as draft capital is an indicator of value. If a team spends a first or second round pick on a player, they likely have intentions to utilize the player within their offensive scheme. If a team drafts a player in the late rounds they seem to be filling out the roster or see upside in the player to compete in camp battles and win a roster spot. In this article, I’ll teach you how to optimize rookie drafts.

Nailing your rookie draft is an important aspect to ensure future success in your dynasty leagues. Roster construction is the main factor to aid individuals on who to draft with their rookie picks. This article will cover the wide receiver and running back positions for your dynasty football draft. Drafting for team need is a question to be answered in more detail in a future article but I would recommend taking the best player available over drafting for team need.

In the NFL Draft we have seen teams select franchise changing players, and in other cases, we have seen busts. When looking at running backs and wide receivers, here are the respective career yards separated by draft class dating back to 2015:

The first season analyzed (2015) has the most yards but the 2020 season has more yards compared to 2019. This is due to more wide receivers being drafted in the first round. When digging deeper you find a discrepancy warranting consideration. There have been only 10 running backs compared to 23 wide receivers taken in the first round. Here are the individual stats for those players:

Ten running backs have accumulated 2,205 more yards and 66 (!!) more touchdowns compared to 23 wide receivers. Injuries could explain why wide receivers did not produce as many yards or touchdowns (i.e., Will Fuller, John Ross).

It seems more first round wide receivers will bust compared to running backs — Rashaad Penny is the only running back to not succeed, he has only played in 56% of games over his three seasons due to injuries. This leaves a 90% hit rate for running backs drafted in the first round of the NFL Draft.

Running backs will have a higher chance of producing immediately compared to wide receivers. Let’s give the wide receivers one year to develop. Disregarding the 2020 class, the hit rate for a wide receiver is 41%. I included: Amari Cooper, Will Fuller, Corey Davis, Mike Williams, D.J. Moore, Calvin Ridley, and Marquise Brown.

Many people might not feel Marquise Brown should be deserving as a hit but he has 15 touchdowns his first two years. Many people might want to include DeVante Parker as a hit, I do not feel it is warranted after finally succeeding in his fifth season (2019) and coming back down to earth in his sixth season (2020). If we include Parker, it is still only a 47% hit rate for wide receivers drafted in the first round of the NFL Draft.

It is determined a first round NFL drafted running back has a 90% chance to be a success, barring injury to Rashaad Penny, the number could have been 100%. What about running backs drafted in the second round of the NFL Draft?

It is more opportune to utilize your first round pick on a running back, more so if they were selected in the first round of the NFL Draft. Even second round running backs in the NFL warrant consideration: 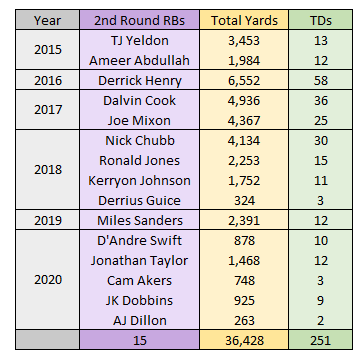 Even these (NFL) second round running backs compared to the first round wide receivers, coming up 6,141 yards and 13 touchdowns short.

Disregarding the 2020 class, 70% of the second round running backs have succeeded in the NFL — Derrius Guice, T.J. Yeldon, and Ameer Abdullah being the unfortunate ones. The 2020 class will need to be analyzed after another season but it looks like 80% of the 2020 class will definitely be a hit. This makes a total 73% hit rate since 2015, depending on what the Packers decide to do with A.J. Dillon, potentially making a 80% hit rate.

This information leaves us with an intriguing opportunity in dynasty leagues. Target Day 2 wide receivers in your rookie draft. These are the wide receivers selected in rounds two and three of the NFL Draft. I decided to combine round two and round three drafted wide receivers as NFL teams will utilize multiple wide receivers more than running backs — meaning, a team’s WR2 will likely be more fantasy relevant than the same team’s RB2. Anomalies like the Cleveland Browns with Nick Chubb and Kareem Hunt. It happens.

I define a “hit” as a wide receiver who produced or flashed potential (analytics) in their first year of the NFL.

DLF first round picks did not use superflex

Look to acquire Day 2 wide receivers with your rookie picks. You could trade for Day 2 wide receivers who did not hit from the previous draft class, in this specific case, it would be the 2020 class: K.J Hamler, Van Jefferson, Lynn Bowden, Bryan Edwards, and Devin Duvernay are the wide receivers. The most intriguing of the group are: Hamler, Bowden, and Edwards.

I would not recommend buying these wide receivers unless they are an addition to a trade. Do not buy the wide receivers who did not hit with a first or second round rookie selection. I am a huge Bryan Edwards fan and thought he would be an absolute steal in 2020 rookie drafts. I cannot fall under take-lock, always be fluid and adjust to situations.

Draft capital is important but typically it is not a good sign if the wide receiver does not produce year one. This leaves huge emphasis on drafting Day 2 wide receivers compared to trading for one. During your Rookie Draft is the only time to potentially land the hit, you likely will not be able to buy low on a Day 2 wide receiver hit after their rookie season (e.g., Chase Claypool/Tee Higgins).

There is no way around it. When you invest in stocks, at some point, you will come across a loss. This should not deter dynasty owners from taking chances to position their team for present and future success. Noting 37% of wide receivers from the second and third round of the NFL Draft will ‘hit’ in the NFL is only half the battle. Still, owners should further scout these players to ensure they have the athletic measurables and go to a team best suited to utilize their skill set properly: 1) team scheme and 2) depth chart.

During your dynasty league’s rookie draft, it may be more beneficial to utilize your first round pick on a running back drafted in the first or second round of the NFL Draft. Take into consideration both roster construction and team need.

You should target Day 2 wide receivers with your remaining selections. This comes with risk but these numbers do not equate NFL situations or the individual player’s measurables and metrics.

This information leaves us with good rules of thumb for running backs and wide receivers:

A limitation to this study is someone in a league might reach on a player and select them in the first round of a rookie draft, therefore making the wide receiver a “first round” selection. These situations are not accounted for. The consensus draft selection for the rookies were taken from dynasty League Football’s rookie rankings and community rookie rankings (2015-2020).

For more Fantasy Intervention, check out: