The Transition: Redraft to Dynasty

The Transition: Redraft to Dynasty

Fantasy Football unites a group of 10-12 friends over the course of an NFL season. Fantasy Football is a time where we all look forward to drafting our teams, week-to-week matchup’s with your buddies, attempting to clinch the playoffs, and winning the Championship for bragging rights amongst your circle. What happens if you get riddled with injuries or your players do not perform to expectations? What a waste of your time and money, right?

How do we prolong the reinforcement stemming from Fantasy Football redraft leagues? Why should your league make the transition to Dynasty Football?

Dynasty Football shares similarities with Redraft — the only difference is you are not just playing for one year, you are attempting to build a Dynasty. You draft (or auction) your team to have control forever. You are the General Manager. Throughout the season is generally where the similarities between Redraft and Dynasty intertwine: 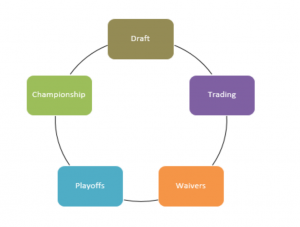 Right off the jump it is easy to understand Dynasty Football is essentially Redraft Fantasy Football, just with additional twists: Draft strategy, trading, waivers, and the offseason.

Arguably the most enjoyable portion of your league — drafting. When you breach into Dynasty Football, the start up draft is a vital part of immediate and/or long term success. Since Dynasty Football encompasses controlling a team forever, you only get one chance to nail the start up. Now before I lose some people after only having one draft, you will have a rookie draft each year. We will talk about this in a little bit.

What is a good startup draft strategy? Do you want to compete right now? Do you want to draft younger players who potentially will rise in value the following year(s)? Before deciding what strategy you want to go with, you will need to make sure you have an understanding of your league’s scoring and roster settings. It is important to remember since you are the General Manager of your team, the future implications should be accounted for.

I would recommend avoiding “YOLO” as your draft strategy, but I am sure we all have a friend like this. Further going into the Win Now strategy and what it means to draft an aging player, someone like Julio Jones comes to mind. An elite talent and fantasy producer but he is coming up to 32 years old and the age potentially is concerning. According to Dynasty League Football (DLF), Julio Jones has an average draft position (ADP) of 39.25, this puts him at an early fourth round selection in your start up drafts. Here are notable wide receivers with an ADP after Julio Jones:

And of course plenty of others, the point being you can draft Julio Jones to win now as he will likely be a better now production player while sacrificing the “age” aspect of the players: 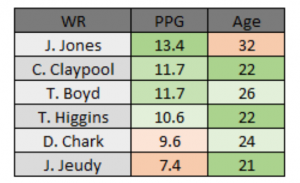 In win now mode you know Julio Jones will provide immediate production. In first year punts, you may want to take the younger asset and sacrifice immediate production to increase the probability of future success for your team, the ten year plan. It is important to note Larry Fitzgerald is 37 years old and Jerry Rice was surpassing 1,000 yards in his age 40 season, showing at times, age might not be the biggest factor for top talent as they hit their mid-30s.

If you decided not to go for the “win now”, this leaves the first year punt strategy. The Win Now strategy has received criticism because, “if you aren’t playing to win then why are you playing?” type vibes. It is in the name, you are giving up your first year to position yourself (hopefully) for greater success by selecting the younger talent who may not be ready to produce in the first year, but would assume after one year they will be relevant fantasy producers (see chart above). Who knows, you could even get lucky and the player will produce year one.

There are plenty of start up draft strategies you can implement. There is no right or wrong way to draft. The biggest piece of advice is let the draft fall to you. Drafting Julio Jones at the early 4th is vastly different from drafting Julio Jones in the late 7th, occasionally value will fall and would be hard to pass up.

Who does not love trading? Trading is one of Fantasy Football’s exhilarating aspects. We all love to trade. Now imagine involving rookie draft picks. What are rookie draft picks? Well, as mentioned before, the start up draft is not the only drafting you will be doing. Every year, just like the NFL, teams will have the chance to select rookies.

The placement of your draft pick emulates what the NFL does, the Champion gets the last pick, playoff wins/losses, and then overall record. Leagues will vary on the determination of the 1.01 selection.

Draft picks are an additional piece making trading fun in Dynasty leagues. Your team needs one more piece to compete? Trading a draft pick for one of those aging assets can help your immediate production needs. Your team is not competing? Selling aging assets for young potential talent or a draft pick in your upcoming rookie draft.

Never be caught as a pretender — the 6-6, 7-5 team that is just average. Go for the win or hit a quick reset to acquire additional draft capital (rookie picks) or young potential players for the following season.

Typically, Redraft Fantasy Football players will check out after their leagues Championship. Makes sense, no need to pay attention to anything NFL related, especially after the Super Bowl too. Why pay attention to Fantasy when you can pull up some sort of ESPN ranking sheet hours before your draft.

The offseason is still a vital period to address your Fantasy Football desires. Dynasty Twitter is loaded with talented Dynasty minds — sharpen your brain and acquire knowledge you can apply to Redraft Fantasy leagues. I love Dynasty Football but it does not mean I still do not indulge in Redraft leagues.

The most important parts of the offseason are trading and rookie scouting. When your Dynasty league has concluded for the year, draft slots are then filled. Scouting the incoming NFL offensive rookie class is a vital part of the offseason but does not necessarily need to be done on your end. Again, Dynasty Twitter is filled with organizations and experts who can do all the work for you — for 2021 names like: Travis Etienne, Najee Harris, Ja’Marr Chase, Trevor Lawrence, Devonta Smith are names you might be familiar with as College Football fans. But what about names like: Dyami Brown, Marquez Stevenson, or C.J. Verdell for example. 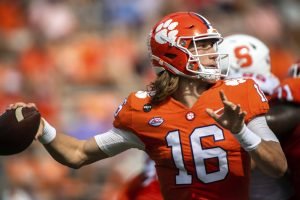 The start up draft allows you to assemble a team toward your philosophy. Making trades performs maintenance to your squad for the immediate and/or foreseeable future. It is common for owners to leave their Dynasty team, it is completely okay if you try a year and it is not for you. Dynasty Twitter often has people reaching out to fill the team an owner left. Dynasty is a way to keep engaged in Fantasy Football year round.

If you made it this far then maybe you have the slightest of interest in doing a Dynasty league. Dynasty if intoxicating and if you believe you have a sharp Fantasy Football mind and can build your own Dynasty…

Thank you for reading this quick reasoning to make your league into a Dynasty league. I will further go into detail on the topics highlighted in this article throughout the 2021 offseason. The next article I will release will dive into the topic of “Startup Draft Strategy”.