Finding the needle in the haystack is equivalent to finding the tight end to produce in Fantasy Football, it is like finding gold. Tight end is a position often streamed week-to-week; if you miss out on a top tight end you likely find yourself in that situation. Here, we will find the edge to increase your probability of finding gold by examining quarterback play and the tight ends 40 times.

Tight ends typically see the greatest drop off in points. In 2020, the TE3 scored similar to the RB22/WR34 and the TE10 scored similar to the RB30/WR47. The Christian McCaffreys and Davante Adams of the world are few and far between, but there remain feasible options from RB/WR2 to the RB/WR20 finish while the tight end does not have the same luxury. Tight end typically takes longer to acclimate to the NFL compared to the running back and wide receiver.

Here are the comparisons for the Top-10 tight ends from the 2020 season and their running back and wide receiver equivalent (16 game Fantasy season):

The TE3 (T.J. Hockenson) compared to the RB22 (Miles Sanders) and the WR34 (Jarvis Landry). That makes the TE3 worth a late WR3 price. The TE7 is worth a WR4 price. At least according to total points. You are not trading T.J. Hockenson for Jarvis Landry in a Dynasty league, if so please follow me on Twitter so we can join a league together.

Do not forget we likely would have had George Kittle finish as a top three tight end and have over 200 PPR points. This is why finding gold is important. What variables do the top tight ends share? Why are the tight ends able to produce?

Since 2000 there have been 15 tight end seasons which have surpassed 1,000 receiving yards for the season, out of the 15 seasons there have been only 13 different tight ends. Below are the tight ends with their respective NFL Draft position:

The average quarterback fantasy finish for a tight end that produced a 1,000-yard season was QB8.8 (see appendix 1a):

There were also eight tight ends who did not surpass 1,000 yards but still had 80+ receptions. Below are the tight ends and their respective draft position:

The average quarterback fantasy finish for a tight end that produced 80+ receptions was QB12.6 (see appendix 2a):

Is the quarterback play the main reason why these tight ends were able to be successful? Let’s look at their athletic profiles.

The average quarterback finishes were QB8.8 and QB12.6. The quarterback can only matter so much – the player still needs to have athletic ability. The one glaring similarity amongst profiles is the 40 time, a sprint covering 40 yards (36.58 m). An evaluation on the acceleration and speed of a player.

Among the eight tight ends who recorded a minimum of 80 receptions: (see Appendix 2b)

The tight ends with a faster 40 time were the tight ends that saw 1,000 yard seasons. The slower tight ends were not able to break 1,000 yards receiving, 80 receptions is still respectful for a tight end and should not be ignored.

Having to constantly worry about a starting line up position is stressful. Week in and week out making waiver wire transactions to ensure the best line up possible from lack of having top talent at the position. Having information to improve your chance at finding the next top tight end could be the most important information to have before your rookie draft.

When evaluating tight ends it is important to understand the quarterback play and the tight end’s athletic profile. Since 2000, the tight ends that have surpassed 1,000 yards or 80+ receptions have been tight ends with a quarterback finish of QB8.8 and QB12.6 with 40 times that average 4.61 and 4.81.

If you were unfortunate and unable to grab T.J. Hockenson and Noah Fant, you should be focused on buying tight ends that fit the criteria during the 2021 offseason to prepare for the 2021 season:

Mike Gesicki and Dallas Goedert’s price may be high but the window is still open. It should be noted that Dawson Knox appears to be the riskiest of the seven, Knox did have an intriguing finish to the 2020 season, 4.6 targets and 3 receptions with an increase of 17.9% snaps over the last six games. Knox can be in line for a successful third year with the continued success of the Buffalo Bills and Josh Allen. Pay attention to what the New England Patriots do in the 2021 NFL Draft, if they select Kyle Pitts then Asiasi’s value will take a hit. The Patriots have shown the capability to support two tight ends.

But Jerry Jeudy, Cortland Sutton, and Noah Fant — yeah, yeah, I get it. Talent over situation. Okweugbunam has the metrics needed to succeed. That is pronounced OH-quh-AYE-boo-nom. Who knows what can happen in two years with roster changes. David Njoku has played four seasons and battled injuries but will only be 25 years old at the start of the 2021 season. A change of scenery could make all the difference.

The purple and blue to the recommended names show the potential they have in their seasons for 1,000 yards or at least 80 receptions. The 40 time will not be the only factor, the tight ends will still need to have a quarterback play of QB8.8 or QB12.6 to have success.

In redraft targeting Travis Kelce, Darren Waller, and George Kittle early will give your team an edge as they will compare to a Top-5 running back and a Top-10 wide receiver. Waiting until the later rounds to grab Eric Ebron is equivalent to starting the RB30 and WR47 (2020 data). That does not sound like a Championship roster.

The 40 time of the tight end is not the solidifying factor to determine success at the tight end position, however it is a solid foundation when paired with quarterback success. Force your attention to sophomore and third year tight ends that fit the above criteria and make a trade before price discovery and find your gold. 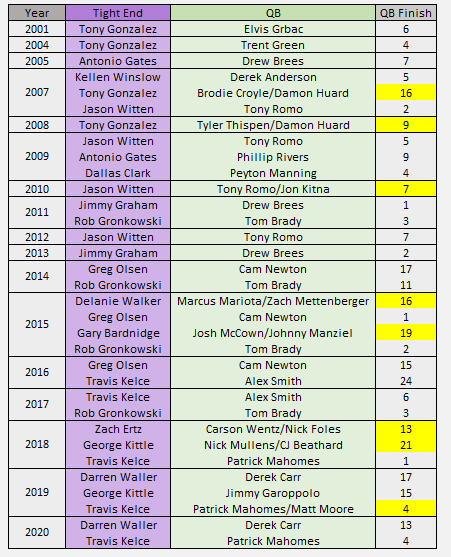 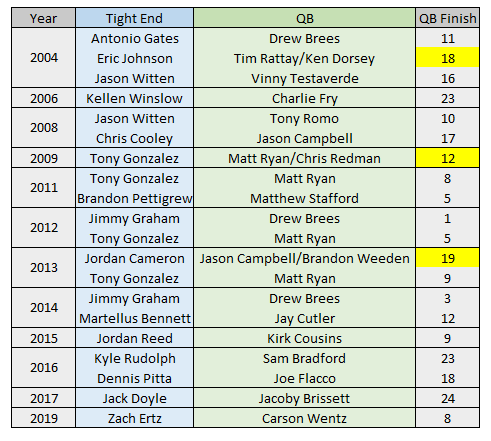