Tight End Breakout – When to Expect it

The importance of having a dominant tight end in fantasy football is like wearing a seat belt in a car. You can drive a car without a seatbelt on and make it to your destination (championship). There can be a few scary parts during the drive, but you can make it. You can also wear your seat belt (dominant tight end) and have a safe ride to the destination. A tight end can act like a seatbelt and ensure safety for the owner.

This article will analyze historic tight ends. I will be looking at how long previous tight ends take to breakout. I will define a breakout season for a tight end as the first year the tight end surpassed 800 yards receiving. I used 800 yards because identifying top tight ends should have a higher threshold.

Check out how to navigate tight ends in fantasy football: 1,000 yard and 80 reception tight ends.

Dating back to 1978, Ozzie Newsome starts off this analysis. Shannon Sharpe, Jason Witten, Vernon Davis, and even Greg Olsen are tight ends warranting mentions. Modern day tight ends like Travis Kelce and George Kittle will insert their names into the best-of-the-best when their careers are done. When did these tight ends produce their first 800 yard season? 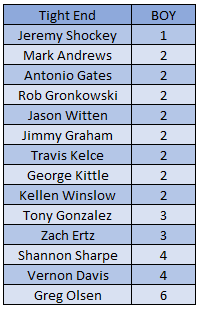 Mike Ditka surpassed 800 yards in his first season (1961), but I left out his data because the data is from 60 years ago. The NFL has changed vastly since his playing days. I wanted to address more current tight ends. Ozzie Newsome was the oldest tight end analyzed (1978).

Taking the previous data into consideration, I will leave out the 2020 rookie tight end class. Let us look at six intriguing tight end prospects. Since 87% of the studies tight ends broke out between years 2-4, there are currently six tight ends to fit the criteria:

The most promising of the group are the Lions Hockenson and the Broncos Fant. Entering year three, the tight ends have improved from their rookie to sophomore seasons in the NFL. Goedert is the next man up after the Philadelphia Eagles’ entire team had a down season in 2020. Reports are indicating Zach Ertz has played his last down as an Eagle. Goedert immediately becomes the TE1 for the Eagles and will be at the top of the chain for targets during the 2021 season.

The Giants Evan Engram is an interesting tight end to evaluate. A monstrous rookie season, and one of the better tight end rookie seasons in history, flopped his next two seasons due to injury. The volume was still there, and in 2020 with a healthy 16 game season, he received 109 targets (4th most among tight ends). Drops are Engram’s biggest concern.

Jonnu Smith is an athletic weapon to pair with A.J. Brown for the Tennessee Titans in the passing game. With back-to-back 400 yard seasons, Smith has yet to take the leap to be a dominant tight end. There should be concern entering year five without improving drastically, he has yet to post over 500 yards through four seasons. The offseason and 2021 NFL draft should be monitored for Smith. Corey Davis is assumed to find a new team in free agency.  If the Titans do not spend high draft capital on a wide receiver, Smith can potentially see his fifth year leap if they retain him in free agency.

The Chargers Hunter Henry has been a serviceable tight end but has yet to cement himself as one of the top tight ends. An ACL injury forced him to miss the entire 2018 season; Henry has bounced back since, playing 82% of his games over the last two seasons with back-to-back 600 yard campaigns. Henry is presumed to hit the free agent market and find a new home.

The information found in this article will be useful when addressing the tight end position in dynasty leagues. Instead of reaching and drafting a tight end with your first or second round selections in rookie drafts, shift your focus to other positions. Use the “disappointing” rookie season to your advantage and trade when the value is low.

Before you start going off about Kyle Pitts, sure, there can be anomalies.

Through seven seasons, Ebron has yet to record over 800 yards receiving in a season. Though the monstrous 13 touchdown season (2018) was intriguing.

It is important to pay attention to draft capital as it is generally an indicator for future success, but it will not guarantee it. Stashing tight ends on your taxi squad will behoove you over stashing running backs or wide receivers; positions that will have a higher chance of producing immediately.

The common breakout season for a tight end was year two, with 53% of the tight ends. Greg Olsen was the only tight end to breakout beyond a rookie deal. A limitation of the study was touchdowns were not factored in, just over 800 receiving yards. In 2009, Olsen’s third season, he finished the season with 60 receptions, 612 yards, and eight touchdowns. Olsen finished as the TE10 on the season. Many would consider this his breakout. The following year he played 16 games and finished as TE23.

If we want to consider players at the top of their position, the bar needs to be set high. It is important to analyze the team’s depth chart and coaching staff. When Greg Olsen had his TE10 season, Devin Hester was the leading wide receiver, not too impressive. The following year for Olsen’s TE23 season, the wide receiver group did not change (and Matt Forte), but the offensive coordinator did. Looking at Jeremy Shockey, he had a breakout year in his first season. However, over the next nine years, Shockey only surpassed 800 yards once.

A tight end like Alge Crumpler had 10% of his seasons over 800 yards during his career. Crumpler did so in his fifth season (2005) and was the only receiver targeted over 85 times and the only receiver over 650 yards. There will be tight ends to surpass 800 yards receiving. The Eric Ebron types of tight ends are serviceable. But we want to roster the historic tight ends, the players to be one day viewed as legends. Leave the weekly waivers to the other owner’s in your league.

There will be variables that influence tight ends’ production: quarterback, scheme, injuries, and target share. Just because a tight end surpasses a certain threshold does not guarantee future success. It is important to note consistency or upward trends in opportunity and/or production.

Noting when the tight ends surpassed an 800 yard season is not the entire equation. Correlation does not equal causation, anomalies happen, but it is important to note that tight ends typically take time to develop.

Thanks for reading my article about tight end breakout possibilities.